Life of an imperfect vegan: that moment when your gas is turned off in your apartment and you can’t use your stove or oven for days.

How am I supposed to cook and blog when I have no stove or oven? I don’t even have a microwave!

All week I felt so annoyed and so helpless…UNTIL I remembered that I have a slow cooker AND a rice cooker! Neither of those need gas to cook things (major facepalm)!

My friend had sent me this awesome recipe for Sweet Potato White Bean Chili from Vegan Society and I had been planning to make it this week, albeit, on the stove as the recipe suggests. But, I decided to adapt it a bit and and try it out in the slow cooker.

It turned out delicious! I imagine it was quite different than how the recipe version would come out, but I’d say this is still worth a try.

If you’re not using a slow cooker, here are your instructions:
Preheat the oven to 180ºC. Place chopped sweet potato on a baking sheet and toss with 1 Tbsp olive oil and cinnamon, cumin, and paprika. Roast in the oven for 35 to 40 minutes. In a large sauce pan, heat 1 Tbsp olive oil over low heat and add onion, 1/2 chopped cilantro, sofrito, and red pepper. Cook over a low heat for 15 minutes, stirring regularly. Add the white beans with their liquid, and the tomatoes. Stir, adding a splash of water to loosen, if needed. Simmer for 30 minutes. Stir in the roasted sweet potatoes along with the rest of the cilantro. Season with salt to taste. Serve over cooked rice with more cilantro and sliced avocado. 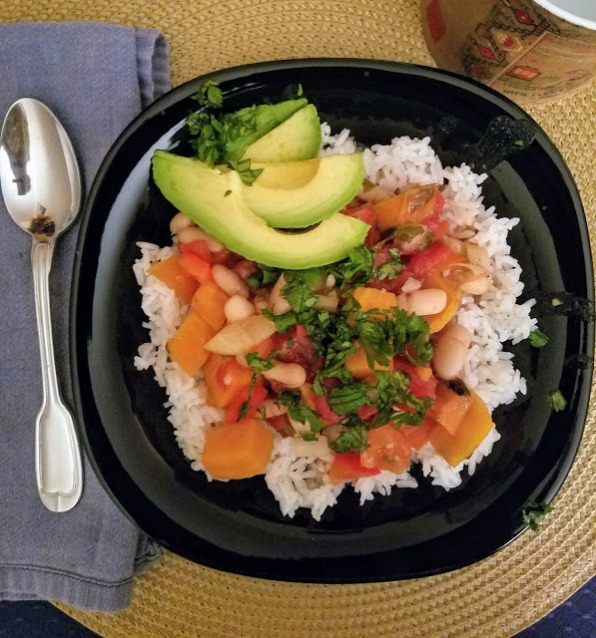