Our neighborhood in Queens has an incredible selection of ethnic foods, ranging from Chinese, Korean, Thai, Japanese, to Colombian, Mexican, Tibetan and more. Inspired by the delicious food we’ve been able to sample during the past year, I’ve been trying to experiment more with flavor and ingredients in my home cooking. Our flavor standards have gotten much higher than our university days and I’ve decided that we shouldn’t have to sacrifice taste when we cook dinner at home instead of order takeout. Besides, it’s cheaper, healthier, more gratifying, and more fun to try to make these new delectable discoveries together at home.
On this journey to flavortown, I stumbled upon a delicious recipe from the ever-amazing Vegan Richa called Veggies and Lentils in Peanut Sauce – Richa, I must say, this title sells it short because it is SO much more than just veggies and lentils. The spicy peanut sauce is creamy and rich and spicy but not too spicy; it is deep in flavor, loaded with fresh vibrant veggies, and protein-packed with lentils and peanut butter. You’re going to love this one, trust me. One slight consideration is that I don’t usually carry all of Richa’s recommended ingredients in my pantry and fridge, so of course, I’ve put my own little spin on this meal without sacrificing the depth of flavor.

Instructions
A (minor) drawback of this meal for me is the amount of vege prep involved, but I’ve gotten around this by prepping my veges on Sunday afternoons and then refrigerating or freezing them to just pop them into the pan when we are ready on a weeknight. The recipe calls for a mixture of vegetables, which I change every time I make it based on what I have on hand. This time it was zucchini, green and red bell pepper, yellow onion, and carrots. Once the veges are prepped, saute them in some olive oil over medium high heat until they are slightly soft but still a bit crisp. Meanwhile, simmer one cup of red lentils until the water is absorbed and the lentils are tender.
To make the Thai peanut sauce, blend together in a food processor coconut milk, peanut butter, thai chili sauce, soy sauce, sesame oil, garlic cloves, lime zest and juice, cayenne, a pinch of sugar, and fresh chopped ginger. This sauce could also be made ahead and kept in an airtight container in the fridge for 1-2 days.
Once the veggies are slightly soft, the sauce is made, and the lentils are cooked, it’s time to assemble! Add the lentils to the veggies and pour over the sauce. Mix it all together until evenly coated and distributed. Let it simmer on low for 5-10 minutes. Serve over rice of your choice with some lime and perhaps some cilantro for a garnish if you’re feeling fancy!? 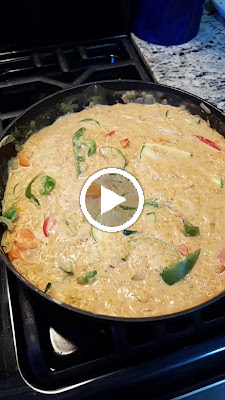 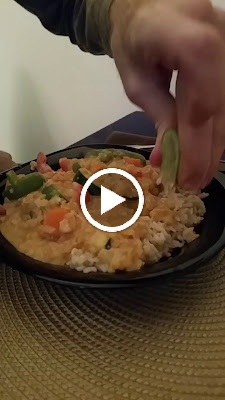