What’s a Saturday without a little FUN? Growing up, funfetti cake was a cake that I always helped bake because it was a recipe in my “cookbook for kids”. It featured easy recipes that kids could help make with their parents. This cake became a favorite in our household, especially on birthdays and special occasions. Since it was my dad’s birthday this week, I decided to figure out how to make a vegan funfetti cake in his honor! 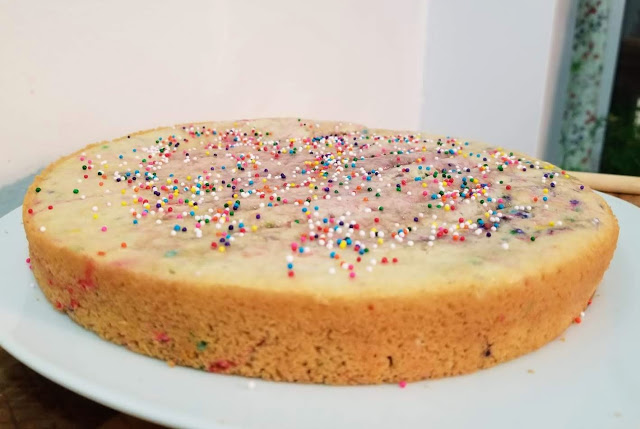 I found a recipe from It Doesn’t Taste Like Chicken and adapted it based on the ingredients I had in the house. I also halved the recipe because I only have one cake pan (whoops!) so can’t conveniently make a layer cake. ALSO – I royally messed up the icing so I just decorated with more sprinkles. That’s okay though – in anticipation of all of the sweets of the holidays, my belly is thanking me for both reduced sugar AND the smaller portion. It was like “lite” confetti cake. 😂

I guess it’s kind of a “thrown-together”, “didn’t have all the ingredients”, “messed up a few steps of the way” – but “STILL TASTES AMAZING” kinda cake. It’s totally imperfect and that’s okay! I encourage you to try it out and maybe add your own fool proof vegan vanilla icing on top. Happy baking!

Ingredients
Preheat oven to 350 degrees. Lightly grease one 8″ baking pan. In a large bowl, use a stand mixer or hand mixer to whip the aquafaba and vinegar until it forms stiff peaks, about 10 minutes. Meanwhile, in a large bowl, whisk together the flour, sugar, and baking powder. Add almond milk, oil, and vanilla extract and stir to combine. Next, fold the whipped aquafaba into the batter very gently. Add the sprinkles and give just 1-2 stirs to combine (over stirring might cause them to bleed). Pour the batter in the prepared pan. Bake for 35 to 40 minutes or until a toothpick inserted in the center comes out clean. Let cool and decorate with icing of choice and/or more sprinkles.