Skip to content
What a midweek treat! Our trip to Urban Vegan Kitchen (UVK) was lively, delicious, surprising, and fun. Highlights include: Buffalo Wings, Chick’un and Waffles, and the Mississippi Mud Pie.

It was a spontaneous decision to meet hubby for dinner. Earlier that day I met up with a friend at a coffee shop, and on my way, I walked right past UVK! I’ve followed their social media accounts for a while now so I knew it existed somewhere in New York. Shame on me for not knowing it was SO close to my work!

Right away I texted hubby to ask if he was down to try it for a hump day treat, and of course he said yes. Happily, the weather also cooperated and we enjoyed a seat by the window, allowing for ample and enjoyable people watching. 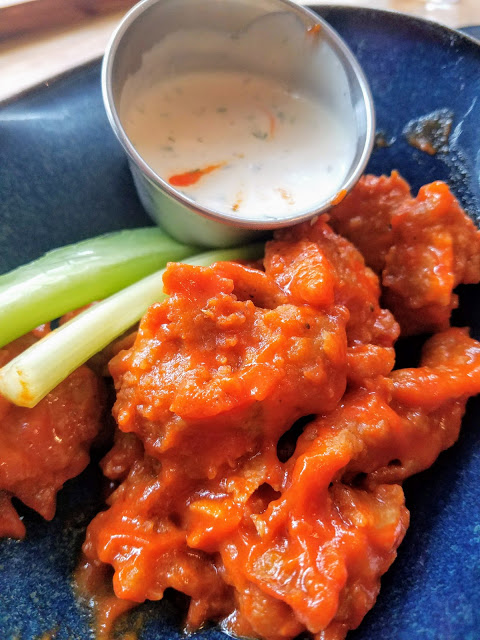 We started with a glass of 2016 Cabernet and a large order of Buffalo wings. I was forewarned by our lovely waiter, but these babies were on fire (literally and figuratively)! They were no joke. Hubby said he thought the sauce was better than any actual buffalo wings he had ever tasted. Made of seitan, the texture was spot on – a bit chewy, light, and the perfect vessel for the signature spicy orange sauce. Honorable mention goes to the vegan ranch dip, which was totally necessary, and also had a depth of flavor and a perfect creamy texture all it’s own. 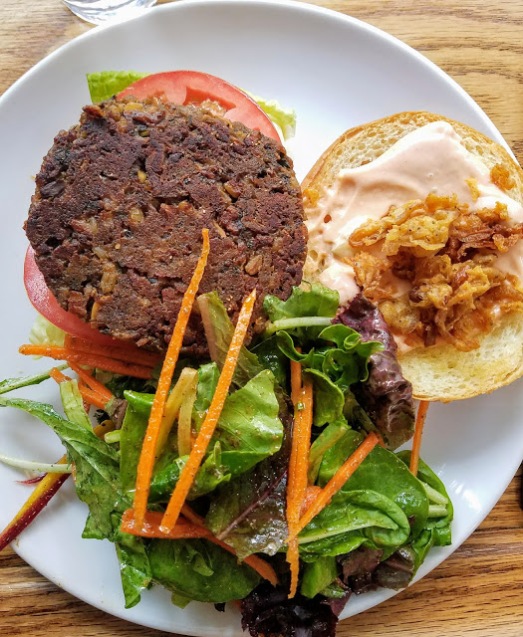 Next came our entrees. I ordered the UVK Quarter Pounder, and hubby went for the Chick’un and Waffles. My burger was huge – loaded with fried onion rings, lettuce, tomato, and a “special” sauce that dripped down my hand in the best way. The sheer size of it was enough to convert non-believers into trying a veggie burger. Trust me, it’s not for wimps. (I may or may not have finished it all, no big deal) Luckily I ordered the salad instead of the fries, because otherwise hubster would have had to carry me out of there. 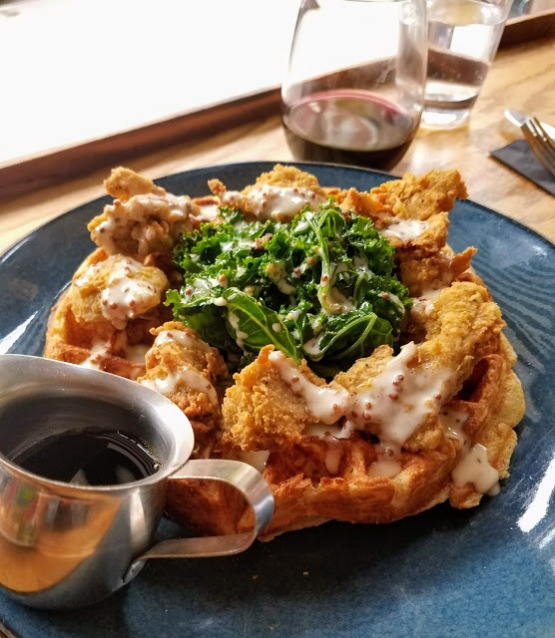 The star of the evening was definitely the Chick’un and Waffles. Honestly, I taste-tested them off of hubby’s plate (for the sake of the blog, of course!) and was blown away. The fluffy golden brown waffle topped with the crispy, spiced fried “chick’un” made of seitan, and a mound of creamy-dressed kale, was near perfection. A drizzle of maple syrup was a nice addition, not overly sweet. Hubby said he didn’t know what to expect, but that it was delicious, tasted remarkably like the real thing, and was super filling. If you go to UVK, order this.

To finish on a sweet note, we ordered one plate of Mississippi Mud Pie and two spoons. The chocolate mousse was rich and decadent, and the cookie crust was the perfect crunch to offset the creamy mousse. It was a chocolate overload for two chocolate lovers.

The ambiance was just as good as the food. What I appreciated the most was that it didn’t seem like a restaurant catering to vegans. You know the type: the hipster decor and the “all natural” branding, exclusive in its target audience and a tad white/elitist. This place was rock and roll. It was funky. There was a live DJ. Besides having the word “vegan” in the name, there was no other indication that it was a vegan restaurant. It was open and welcoming to everyone. Hubby, only a part time vegan, was swooned. I bet most of their customers aren’t yet committed vegans, and perhaps the friendliness of UVK’s atmosphere might just encourage them to look into it a little more.

On a similar note, the menu was really well curated, with lots of non-vegan favorites turned plant-based (like Chick’un & Waffles and Lasagna), as well as a few common vegan choices (Green Curry and a Macro Bowl). It caters to many different types of visitors; without being excessive in choices, there is something for everyone. Also, the cocktail list was fantastic, as were the wine and beer choices. This fact helps normalize the restaurant in a subtle way. It’s perfect for drinks + appetizers after work, a three-course meal like we had, or just an after dinner dessert!

I’m very glad I stumbled upon UVK and realized how close it is to my work. It’s a bit beyond our budget for a regular weekly visit (most places in NYC are!), but for special occasions and a random treat, it’s absolutely perfect. Whether you’re vegan or not, it doesn’t matter: it’s definitely worth a taste. 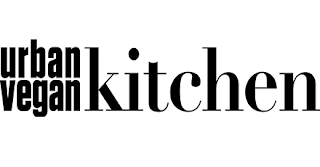