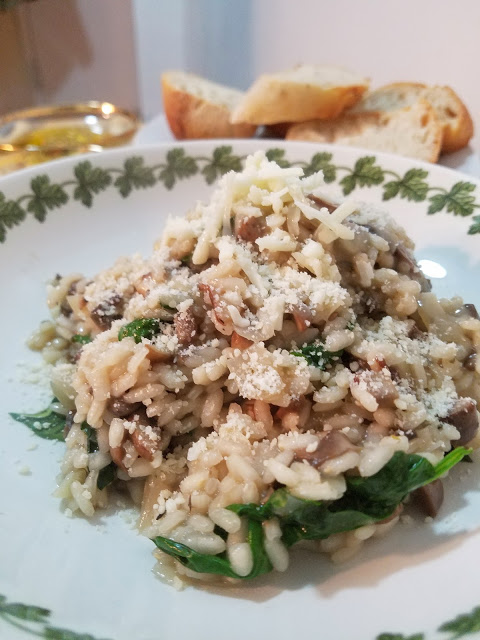 Today it was hubby’s turn to handle dinner, but he very nicely asked if I could help him make risotto since he wasn’t sure how to cook it and he had a yen. I also liked the sound of risotto for dinner, so I agreed to help. Plus, it would be great for him to know how to do it for next time. We also arrived home the same time, which rarely happens, and for whatever reason that makes it easier to for us to cook dinner together being that it’s from start to finish. To put it bluntly, the stars had aligned for the risotto!

I’ll be the first to admit that hubby and I don’t cook very well together due to a variety of reasons: I get frustrated when he doesn’t know how to do things or asks a lot of questions or takes a long time to chop things, and he gets frustrated when I don’t have patience or when I try to rush things or when I don’t explain steps clearly. But, when I’m tired from a long day of work and hungry for dinner, there ain’t no way I’m going to be patient. I also am not a cooking guru and oftentimes not sure of how to proceed myself, so I shouldn’t have to act as de facto head chef. I just want to learn and experiment together, and I want him to trust his instincts. Step by step, we are learning to understand each other’s needs. Tonight was a nice balance of me guiding but him following his gut on how to execute each step.

Instructions
Firstly, he chopped a small yellow onion, two cloves of garlic, and half a container of mushrooms, while I boiled up some bouillon into vege stock. I sauteed the garlic and onion in olive oil with some salt and pepper for a few minutes, and then added the mushrooms and continued to stir until the mushrooms had reduced in size and the onions were becoming translucent. Then hubs added the arborio rice and I stirred for about a minute until the rice started to become translucent as well. Next, he started to add the warm vegetable stock, about a half a cup at a time. He stirred the entire time while I added more liquid once it was all absorbed by the rice. The constant stirring is what makes risotto creamy because it helps the rice release its starch. It’s a good dish for two people to cook together, mostly because one person is a slave to the stirring and it is boring stirring in the kitchen without another person to entertain you! Once all the stock was gone and the last bit of liquid was almost completely absorbed, we threw in a big handful of spinach and folded it in until it was wilted but still bright green in color. And that’s it!! 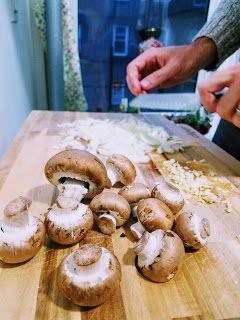 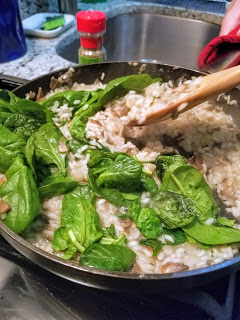 Non-vegan hubster added a big handful of shredded mozzarella cheese to his warm risotto to make it extra gooey and rib-sticking, and I added a sprinkle of parmesan cheese to mine, but it is honestly not even necessary. It is a creamy dreamy delight, even without adding anything to it. I must proclaim: risotto is the vegan’s solution to a creamy non-dairy pasta dish, without adding any dairy substitutes or nut products!! Hallelujah!

We continued the carbo-loading with some gorgeously fragrant fresh bread (potato and oregano flavor from Eataly, the amazing Italian marketplace near hub’s work). Reminder to self: eat more good, fresh bread. Life is too short for plain white bread.